Regularization of tax breaches and settlement of disputes

Law Decree no. 119/2018, containing “urgent tax and financial provisions” was published in the Official Gazette and has come into force starting from 24 October 2018.

The Law Decree introduces different possibilities to regularize tax (but also social security) breaches, thus reducing penalties, interest and, in some cases, even taxes themselves, depending on the specific procedure applied by the taxpayer. Some of the main updates are briefly described below.

All remarks contained in Tax Audit Reports filed by 24 October can be regularized (a partial regularization is not admitted) by submitting supplementary tax returns and by paying the tax amount due (with subsequent write-off of penalties and interest).

The new provisions do not replace the current voluntary tax settlement procedure (“ravvedimento”), which can still be applied to regularize only some of the remarks included in the Tax Audit Report, though providing the payment of penalties (reduced to 1/5) and of interest, besides tax due.

The write-off of penalties and interest is also granted for those taxpayers who, at the Decree effective date, had already entered into a tax settlement agreement without paying the first instalment or one-off amount.

A new edition of the so-called “tax bills scrapping” ("rottamazione delle cartelle") is established in order to settle amounts due to the tax collection office between 1 January 2000 and 31 December 2017.

In this case, save for some specific situations highlighted by the Decree, infringements can be regularized by paying taxes, with subsequent write-off of default penalties and late payment interest.

Pending tax litigation proceedings up to the Court of Cassation level can also be settled.

The concession applies to appeals notified to the counterparties by the Decree effective date and allows to settle the tax litigation by only paying the tax due (without penalties and interest), though with some exceptions.

In fact, should the taxpayer win at the Court of first instance, a further concession equal to 50% of tax due is provided.

Should the taxpayer win at the Court of second instance, the proceedings could be settled with an 80% discount on the tax due (providing the write-off of penalties and interest in both cases).

A further measure in the Decree allows to self-amend, before audits and claims by the Tax Authorities, unfaithfulness in (but not omissions of) tax returns related to years from 2013 to 2016, relevant for the purposes of income taxes (and their substitute taxes), of withholding taxes and social security contributions, of Regional Income Tax and of VAT.

As a general rule, by filing a supplemental return to the original tax return, for each tax period, a taxable amount up to 30% of the original stated amount can be regularized, up to a maximum limit of Euro 100 thousand.

A 20%-rate substitute tax must be paid on said higher taxable amount.

Since this is a Law Decree, the text can be subject to amendments due to its conversion into Law.

We will provide you with any further update, once the provision is definitively approved.

In the meantime, we invite all concerned Clients to contact our reference professionals for further details and examinations. 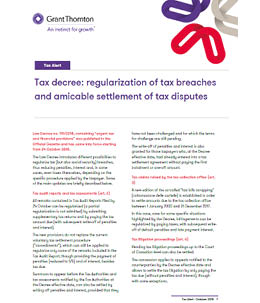