A recipe for succes

As mentioned above, a Financial Due Diligence examines and analyses in depth, among other things, three key elements: EBITDA, Net Financial Position and Net Working Capital. These actually represent the basis to determine the value of a company (or group of companies or business unit) object of the transaction.

Typically, for the purposes of a brief valuation (thus excluding the discounting methods of prospective cash flows) the following formula is applied:

Of course, there can be countless deviations from the basic formula, which depend on the intrinsic characteristics of the company being analysed or by the specific features of a given industry. Actually, additional elements are often added to the formula above, such as for example surplus assets (real estate and assets which did not generate EBITDA in the reference period).

Without entering into the details of valuation theory, we can define EV as the “gross” value of the company under analysis, which depends on its profitability, EBITDA, and on the market multiple, which is a summary of several elements which the investor considers with reference to a specific company operating in a given industry. EV can be defined as the “gross” value of the company, since it does not consider its capital structure, i.e. the mix of risk capital and of debt financing corporate activities. To this end, it is key to analyse the net financial position and the net working capital in order to determine the company’s equity value (i.e. the price for 100% of the company).

For the reasons above, the Financial Due Diligence focuses on the analysis of the EBITDA, of the Net Financial Position and on the Net Working Capital dynamics.

Analysis of the normalised EBITDA

The key question when analysing EBITDA is: “Is the EBITDA resulting from the accounts representative of the company’s ability to generate income?”.

Here’s where Due Diligence comes into play: starting from the EBITDA, as resulting from the corporate accounts, it identifies all those distorting elements to be included and excluded, thus leading to the normalised EBITDA, i.e. the most representative indicator of the company’s situation and of more interest to the buyer and to the other subjects involved (e.g. the funders of the operation).

Determining the normalised EBITDA means identifying all cost and revenue items which have a distorting effect thereon, which can be divided into four groups:

The analysis of all these elements leads to determine the normalised EBITDA.

It is worth underling that the Financial Due Diligence is not limited to this economic analysis. The key elements of the company’s profitability are also analysed, such as the trend and concentration of revenues, the marginality of products and services and fixed overheads. There are many types of analyses which can be carried out depending on the industry and on the specific features of the company considered.

The analysis of the Net Financial Position (or NFP)

The Net Financial Position is the sum of financial liabilities net of cash and cash equivalents. Nonetheless, within an M&A operation, there are a series of elements which impact this value, and also in this case the indicator is called normalised NFP.

Among cash-like items are for example investment in short-term financial instruments.

Among debt-like items, instead, are all debt items which can be considered as financial liabilities; a typical example is overdue trade payables. Moreover, it is important to consider the off-balance sheet items, which do not appear in the corporate accounting or financial statements. These are the future disbursements which the investor will have to bear after acquiring a shareholding in the corporate capital. The most common example is probably the operating lease debt recorded in the accounts basing on Italian accounting principles, as mentioned above.

In principle, all the items excluded from the EBITDA are included in the calculation of the normalised NFP, whereas all items included in the EBITDA (net of assets and surplus assets/liabilities) is part of the Net Working Capital.

Analysis of the seasonality of the normalised Net Working Capital

The Net Working Capital (or NWC) is defined as the algebraic sum of trade receivables, trade payables, stocks and other current receivables and payables. The NWC dynamics are very important as they have a direct impact on the company’s cash. We can actually say that the NWC mirrors the company’s cash, i.e. the changes therein are diametrically opposite to cash flows.

For example, the Net Working Capital of a company operating in an industry characterised by a marked seasonality will be strongly influenced by its business, depending on the timing of its sales and supplies. The seasonality impacts the amount of funds available in a given moment and consequently the company’s NFP, the latter being a snapshot of the corporate situation at a specific moment in time.

Therefore, buyer and seller could benefit or suffer from the fact that the company has a low NWC (higher cash) or a surplus NWC (lower cash).

The Financial Due Diligence focuses on these aspects to understand the NWC profile (and, thus, the cash profile) of the company being transacted, in order to define a mechanism which can grant a fair price for the transaction, not influenced by the effects of the business seasonality. 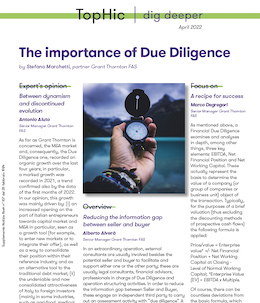