The law provides the increase of the standard VAT rate and of the reduced VAT rate in the next years:

The mid-year stability law for 2017 contains relevant provisions that affects the accomplishment of VAT fulfilments starting from the year 2017.

to reduce the VAT gap (i.e. wider application of the split payment) and

Increases will enter into force unless other measures will be implemented to obtain an equivalent increase in revenue or reduction of costs.

The new provisions significantly reduce the period of time within which a VAT taxable person:

According to the amended provisions, the right of VAT deduction has to be exercised, at the latest, within the term for filing the yearly VAT return for the year during which VAT become deductible. The rule is applicable to purchases invoices and Customs bills issued starting from 1 January 2017.

According to the former provisions, the right of VAT deduction could be exercised, at the latest, within the term for filing the yearly VAT return for the second year following the one during which VAT become deductible. Former provisions apply to purchases and importations carried out during years 2015 and 2016.

The threshold for offsetting VAT credits with debts for other taxes, social security contributions etc., without the obligation to obtain the “visto di conformità” (a sort of certification of conformity of VAT bookkeeping) is reduced from 15,000 EUR to 5,000 EUR per calendar year.

Over such threshold, the yearly VAT return or the form for quarterly VAT refunds (or offsetting) shall contain the “visto di conformità” or a similar certification (as provided by the Law).

According to clarifications provided by the Tax Agency (Resolution 4 May 2017 n. 57/E), new rules apply to yearly returns filed starting from 24 April 2017 (day in which the Legislative Decree no. 50/97 entered into force) as to the yearly VAT return. Conversely, for quarterly forms, new rules apply starting from the one related to the second quarter of 2017. At this purpose, a new form has been enacted on 4 July 2017 (Act of the Director of the Tax Agency no. 124040).

Starting from 1 July 2017, the application of the split payment - as mechanism to charge VAT and remit the same to the Treasury - is extended, both in subjective and objective terms.

Until 30 June 2017, the provision was applicable to supplies of goods and services, other than those subject to the reverse charge mechanism, towards the majority of Public Bodies.

Art. 17-ter of the Italian VAT Law (Presidential Decree 26 October 1972 no. 633) provides the principles for the application of this anti-fraud measure under which:

The Decree of the Ministry of Economy and Finance of 23 January 2015 states operative rules for the application of the split payment.

Starting from 1 July 2017, the split payment applies to all supplies towards:

The application of split payments has been extended also to those supplies of services subject to withholding tax (such as supplies of layers, architects, etc.).

However, as far as the new provisions are concerned, the dust seems not settled yet. Indeed, the Decree of 23 January 2015 has been amended two times, significantly changing the purchasers the law refers to (i.e. the entities falling in one or more of the above listed four categories of subjects). Consequently, the content of the lists for each of the four categories of entities - published in the website of the Department of Finance - changed twice and a third and final versions has been published on 27 July 2017.

However, various procedural aspects are still not fully clear, as commented also by the Italian Association of Stock Companies (Circular of 25 July 2017 no. 18) and explanations from Tax Authorities are expected in the form of a Circular letter from the Tax Agency. 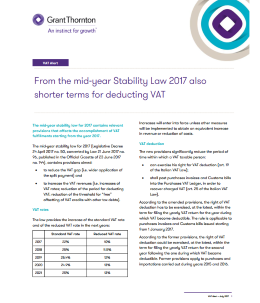