The President of the Italian Republic, Sergio Mattarella, considered the extraordinary need and urgency to contain the negative impact that the Covid-19 epidemiological emergency is having on the national socio-economic fabric, issued a Law Decree containing measures to strengthen the national healthcare service and to provide economic support to families, employees and businesses.

Paolo Besio, Partner of Bernoni Grant Thornton comments: “Retail stores activities, already strongly impacted since the beginning of the crisis, have already been suspended from 11 March, save for limited exceptions, i.e. stores selling food products and consumer staples. With its Decree dated 18 March, the Government introduced a tax credit equal to 60% of the rental fee paid in March, with the aim of partially containing the effects of the downturn.

The Government’s aim is surely noteworthy, although article 65, in its actual formulation, has some limitations which we believe should be removed with a legislative amendment or thanks to the possibility, allowed, to adopt a substantial interpretation of the norm, rather than a merely formal one. If this weren’t true, the government’s objective would be attained only to a minor extent. For example, limiting the eligibility to obtain the tax credit only to buildings with cadastral classification as C1 would result in the exclusion of all activities carried out in shopping centres.

Simply recalling the Ateco activity classification codes and the relevant definitions to identify those activities excluded from the suspension and thus from the tax benefit, will penalise many businesses which do not sell any food products or consumer staples, but which fall within those too generic categories and/or definitions”. 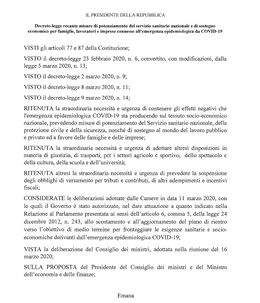