This year, especially for the many health, economic, and social effects following the pandemic crisis that is still ongoing, the Law has a more crucial role than ever in creating expectations and dictate the actions to be taken to get over the crisis.

However, the promulgated law, apparently, does not fully meet these expectations but this article is aimed at providing a technical – and not political – opinion.

The structure of the law is actually very complex, thus making its interpretation difficult (the first article alone includes 1,150 paragraphs…) and many of its provisions are related to the future issue of implementation decrees, or even amendment decrees (as happened with one of the first law decrees of 2021). Moreover, some provisions need to coordinate with the many law measures that were issued in 2020 to deal with the pandemic emergency, as well as with some postponements provided under the so-called “Milleproroghe” Decree (law decree no. 138/2020).

Therefore, operators are apparently dealing with a law which regulates some issues that are in some ways minor compared to the economic crisis which many players are going through. In this issue of TopHic we would like to provide a brief outline of the most significant updates that we deem it useful to mention and are aimed at supporting the economic recovery.

Some rules are aimed to support liquidity and the financial strengthening of companies: these are better analysed in the “Expert’s opinion” (with particular reference to tax allowances and incentives provided for strengthening of capital) and the “Focus on” (with reference to new tax credits on capital goods, to R&D bonus, and to 4.0 training plan) of this Tophic issue.

As a general outline, the measures having the highest tax (and corporate) impact are included under article 1 and can be briefly listed as follows:

In addition to the above specific measures, there are other relevant provisions that are worth being mentioned and considered to evaluate development opportunities.

The first one is the extension of corporate assets revaluation also to goodwill and other intangible assets already registered in the financial statements at 31 December 2019. As known, the corporate assets revaluation is aimed to allow companies to increase their equity (therefore, also to deal with any losses that could possibly generate), registering higher values among assets.

The peculiarity of the provision consists, on the one hand, in the low tax cost of the revaluation (3% compared to the higher rates applied in the past) and, on the other hand, in the possibility to revaluate single assets (and not necessarily the whole category of assets). Now, the law extends the revaluation – applying the same 3% tax rate – to the realignment of accounting and tax values. These values arise following M&A operations that are neutral from a tax perspective and that generate goodwill and intangible assets.

The realignment of the 3% tax cost must be considered carefully, as it represents a tax opportunity (due to the possibility to deduce the relevant depreciations) and an administrative simplification (as it improves on the differences between accounting and tax values).

The second provision we would like to mention is the possibility for individuals and non-commercial entities to re-determine the tax cost of land and shareholdings as initial cost value for the purposes of taxation of income (the capital gain derives from the difference between the sales price and the initial cost, which can now be re-determined).

The provision represents a further extension of past regulations – which are now constantly applied – to revaluate the cost of shareholdings and land by paying an 11% substitute tax, applied to the entire new re-determined value. The revaluation must be finalized by 30 June 2021 by paying the relevant tax, after preparing a proper opinion by a qualified expert. Shareholdings and land held at 1 January 2021 can be revaluated. This possibility is provided as part of a tax planning aimed at the future sale of the concerned assets.

The third provision we would like to highlight is the extension of the so-called building “110% superbonus”, including some new elements. The term to benefit from the allowance – i.e. from the tax deduction of expenses for concerned building interventions – has been extended from 31 December 2021 to 30 June 2022.

There are also some operating updates concerning, among other things, the possibility to benefit from the 110% deduction also for multi-family buildings held by one single owner (always meant as individuals, outside the scope of the business activity), for run-down buildings, for roof insulation interventions, for interventions aimed at removing architectural barriers, for installations of solar-power plants, etc.

The fourth provision concerns a properly corporate-law measure, which combines with those aimed to support and strengthen companies’ capital. It consists, specifically, in the exemption of companies from the application of accounting fulfilments (provided under the Italian Civil Code) for the coverage of losses generated in the FY at 31 December 2020 (thus, suspending the specific fulfilments provided under articles 2446, 2447 and 2482-bis of the Italian Civil Code, which establish times and procedures according to which shareholders can intervene if losses are higher than one third of capital).

Specifically, companies have time to reduce losses to less than one third of capital up to the fifth following FY (and not to the immediate following FY, as generally provided), thus having more time to cover them. subsequently, if losses make capital be lower than the statutory minimum amount, the shareholders’ meeting resolving upon their coverage can be called within the extended term of the fifth following FY.

On the other hand, in case of losses, directors still have the obligation to immediately call the shareholders’ meeting, to provide them with the report required under the Italian Civil Code, and to comply with all relevant fulfilments for the coverage of losses, but they can resolve upon (and proceed with) the coverage of losses within the extended term.

The fifth and last provision we would like to mention is aimed at developing research and skills. The Budget Law provides a fund to support investment in “human capital” within strategic areas. This fund aims to incentivize the integration of newly-graduated young people in the production economy and involve the production system to provide financial support to training initiatives.

Such training initiatives should be addressed to the development and acquisition of managerial skills. A tax credit is also provided - which differs depending on the company’s size – to support gender equality.

These are, in brief, the main new provisions, to be evaluated (and applied) within the scope of enrepreneurial decisions aimed at overcoming this difficult phase, taking opportunities and benefitting from issued regulations. All Grant Thornton Italy professionals would be pleased to analyse the many and fragmented new provisions in the Budget Law 2021.

One last consideration concerns the so longed-for tax reform, which is also oriented to simplification and to reach an efficient and effective relationship between tax authorities and taxpayers, both in terms of fulfilments and in terms of a correct use of public resources generated from Inland Revenue.

Therefore, the measure contained in the Budget Law providing for the establishment of a proper fund to further fight tax evasion, whose resources come from higher revenues generated by taxpayers’ voluntary tax fulfilment (so-called tax compliance).

This is certainly the right way, but this must be supported by concrete measures that simplify the understanding of the tax regulation and its application. In addition to this, politics can then intervene on the right extent of the tax burden and implement the necessary balances.

We will certainly overcome this difficult period, although it’s up to us, as we must be able to take the opportunities and correctly respond to the requirements set by the legislator. 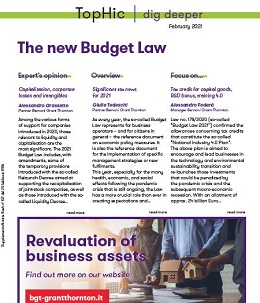