The Italian 2017 Budget Law has finally introduced in the Italian tax system a new separate taxation procedure of business incomes deriving from sole proprietorships and commercial partnerships (IRI), both fulfilling an ordinary accounting scheme. In this article, published in the magazine “Bilancio e reddito d’impresa” edited by Wolters Kluwer, after a brief initial digression on past laws aimed at introducing the abovementioned separate taxation procedure, the authors, Stefano Salvadeo and Emanuele Pucci, analyse new art. 55-bis of T.U.I.R. (Italian consolidation act on income taxes), which contains the new regulation on IRI and its related application rules.

The introduction of IRI in the Italian tax regulation represents the ending phase of a process which encompasses four previous unsuccessful implementation attempts.

The alignment of income subject to the tax on individual income (IRPEF) with income subject to corporate income tax (IRES) has finally been realized through art. 1, paragraphs 547 and 548 of Law dated 11 December 2016 no. 232, which led to the introduction of art. 55-bis of T.U.I.R. concerning IRI.

The aim of IRI is to incentivize the re-investment of profits in small and medium enterprises, in order to grow and develop production activities. In this perspective, business income will continue to be subject to IRPEF if profit generated or previously re-invested are withdrawn by sole proprietors or distributed by the companies benefitting from the new taxation system. 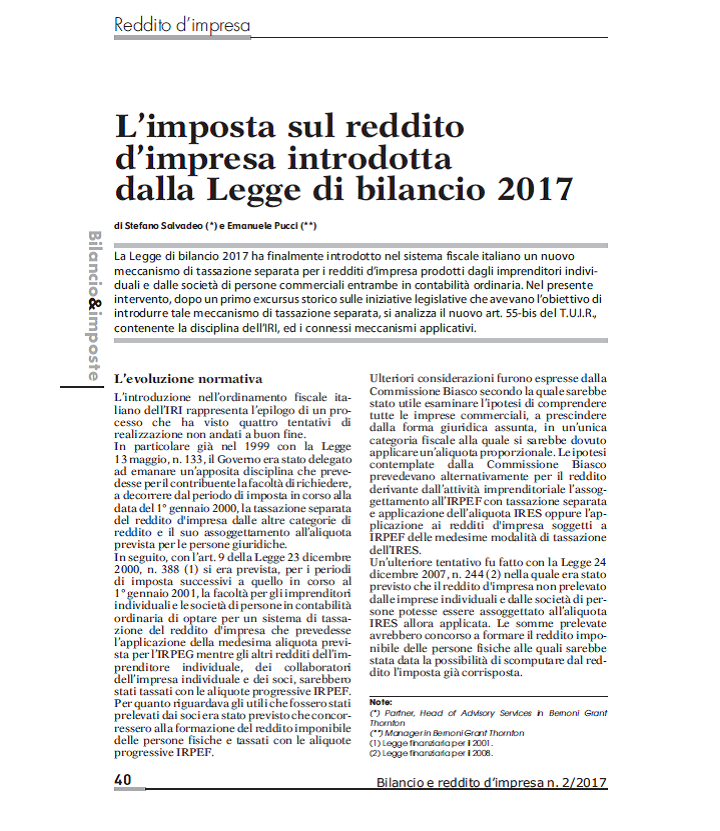