Italy is renowned worldwide for its millenary history, traditions, culture and arts, high quality of living, as well as hospitality towards tourists.

Unfortunately, its reputation is not as positive when the tax burden is considered.

Nowadays, though, there are some particular tax regimes in force that, provided that individuals meet specific requirements, can make Italy attractive from a tax point of view as well.

In 2010 a favourable tax regime was in fact introduced providing for a partial tax exemption of income from employment, self-employment or business activities, equal to 70% for men and 80% for women. This was aimed at bringing back both Italian citizens and EU citizens who had moved abroad after a period in Italy.

This special tax regime was later superseded by the introduction of two provisions (favourable regimes for inbounds) having the same effect on income, i.e. a 50% exemption (30% up to 31 December 2016) of income from employment, self-employment and business activities: the introduction of art. 16 of Law Decree n. 147/2015 further widened the scope of application of this special tax regime, while partly amending the relevant requirements.

The common thread underlying these favourable tax regimes is the need for individuals to qualify as tax resident of Italy, according to art. 2 of the Italian Consolidating Act on Income Taxes (TUIR), and to maintain this status for a given period of time; furthermore, these are all temporary regimes, meaning that individuals can benefit from them for a certain number of years, after which the entire employment, self-employment or business income will be subject to taxation.

Below is a brief overview of the various favourable tax regimes available. We invite you to reach out to us, should you be interested in analysing your personal situation to assess whether any of these could be applicable to you and to identify the best solution for your specific case.

Professors and researchers can benefit from an exemption of 90% of their employment or self-employment income from income taxation provided that:

This regime was made permanent, meaning that all individuals having the requirements above and moving to Italy at any time can benefit from the partial tax exemption for 4 fiscal years.

As mentioned above, the Italian legislator introduced two favourable sub-regimes for inbounds, both providing for a 50% income tax exemption, but basing on the requisites of two different paragraphs of art. 16 of Law Decree n. 147/2015. The table below shows the different requirements under the two regimes, as well as common ones. 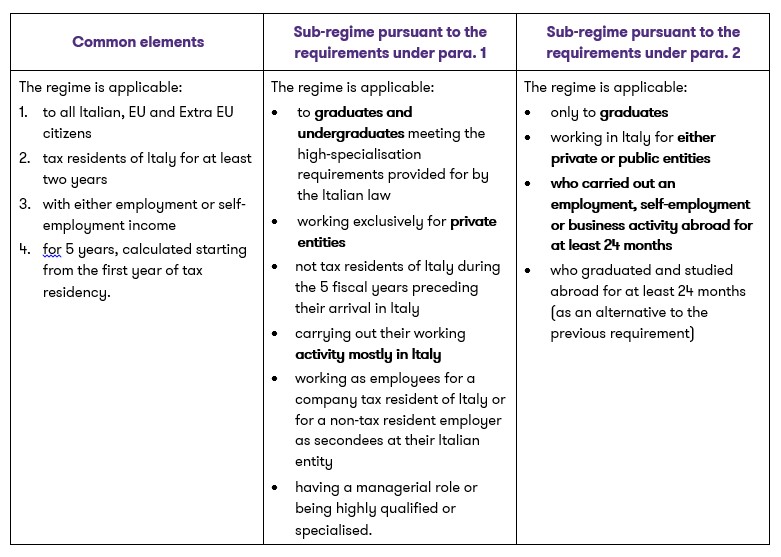