State aid measures: evolution at the time of the pandemic

The health emergency caused by COVID-19 represents a clear threaten for all global economies, which, due to the shock suffered, are going through a serious recession.

The first reaction to the pandemic, characterized by progressively more restrictive containment measures, led to a decrease in production, as well as a drop in demand, at both domestic and international level.

Since the beginning of March, the greatest part of economists and entrepreneurs already called out for the need of an international collaboration and coordination among adopted policies to respond to COVID-19(1): first of all, of a European Union strategy.

On 19 March 2020, to meet the increasing need for support of European businesses and Member States’ initiatives, the European Commission adopted the Temporary Framework for State aid measures, in order to support the economy in our continent. The aim was allowing Member States to exploit the maximum flexibility of public investment, departing from the regulation provided on State aid measures.

The Temporary Framework does not replace the previous European regulation, but rather integrates with public intervention instruments the ordinary measures already provided based on the State Aids regime.

We must consider that, by favouring one or another company, public financing inevitably have an effect on exchanges between Member States, thus implying a concrete risk to falsify or threaten a fair competition, which is the cornerstone of the European economy.

In order to avoid such risk, the European Union provides ordinary measures, being compatible with the domestic market, which can be used by Member States to finance private entities: the so-called State aid measures, which have their legal basis in article 107 of the Treaty on the Functioning of the European Union (TFEU).

In particular, State Aids are defined under paragraph 2, letter b), which states that “aid to make good the damage caused by natural disasters or exceptional occurrences” cam be considered as compatible with the internal market, thus exempting such aid from the obligation of being previously approved by the EU.

In order to avoid such situations, art. 107, paragraph 3, letter b), provides that “aid […] to remedy a serious disturbance in the economy of a Member State” can be considered as compatible with the internal market, prior to approval by the EU Commission, in order to assess their purpose, adequacy and proportionality: this is the case of the Temporary Framework.

As previously mentioned, the European Commission firstly introduced five measures aimed at ensuring businesses a higher liquidity and a beneficial access to financing.

In particular, Member States were authorized to grant aids of a limited amount in the form of:

On 3 April 2020, the European Commission introduced a change to its first communication in March, allowing national governments to act with further public support measures, such as:

With the end of the most restrictive phase and the beginning of a new coexistence phase, the Temporary Framework was further amended on 8 May 2020. The Temporary Framework was integrated providing the possibility to grant public support measures, in the form of recapitalization, to non-finance companies, with limited effect up to 1st July 2021. Moreover, the European Communication allowed Member States to support companies in financial difficulties, by providing subordinated loans at favourable conditions up to December 2020.

The Communication dated 29 June 2020 (C(2020) 4509) introduced a third amendment, which extended the application of the Temporary Framework for State aid measures to all micro and small enterprises, thus broadening the beneficiaries, if they have been already in difficulty since  31 December 2019(2).

This amendment is perfectly consistent with the European Commission strategy, being strongly committed to support SMEs, particularly innovative SMEs, which play a crucial role for the economic recovery of the EU, given the composition of the European market.

Moreover, through this amendment, the European Commission deems that State aids should not be subject to the delocalization of a production or other types of activity of the beneficiary from another country of the European Economic Area (EEA) to the Member State that grants aid, since this condition apparently has very prejudicial effects on the domestic market.

As mentioned, it must be considered that the Temporary Framework integrates and extends the opportunities provided by the EU ordinary regulations on State aids available to Member States to mitigate the social and economic impact of coronavirus emergency under art. 107, paragraph 2, letter a).

Furthermore, Member States have the possibility to combine all support measures provided by the Temporary Framework with the opportunities provided under EU Regulation no. 1407/2013, so-called De minimis rule, to grant aids to businesses.

Lastly, on 13 October 2020, the fourth amendment to the Temporary Framework was approved, through which the European Union extended its scope of application.

All Temporary Framework provisions are extended by six months, i.e. up to 20 June 2021, except for the support to recapitalization, which has been extended by three months, up to 30 September 2021.

The fourth amendment also introduced a new measure to allow Member States to support businesses suffering a loss in turnover by at least 30% compared to the same period in 2019 due to the coronavirus pandemic. The new support will contribute to part of fixed cost borne by beneficiaries, which are not covered by their revenues, up to an amount of 3 million Euros per company.

In brief, all measures integrated in the Temporary Framework are:

Since Italy is Member State that has been most affected by the pandemic since the first months of 2020, it could particularly benefit from the extension of State aid measures.

In particular, with the communication dated 28 July 2020, the European Commission approved a state aid plan for 6.2 billion € to support businesses and self-employed affected by the coronavirus pandemic. According to the Commission data, the provided measures should support 2.6 million beneficiaries.

Lastly, the European Commission provided the possibility to increase the non-refundable portion of granted amounts up to 50% with regard to loans granted to support internationalization processes managed by Simest on behalf of the Ministry of Foreign Affairs and International Cooperation.

The so-awaited European response to the economic crisis caused by the COVID-19 emergency is a multi-step process which has not yet been concluded.

In this perspective, the next step should be the adoption of the Recovery Fund and the Multiannual Financial Framework 2021-2027, which are crucial to build a new Europe.

(1) https://www.bancaditalia.it/media/notizia/nessun-paese-un-isola-per-una-risposta-coordinata-al-covid-19/
(2) The definition of firm in difficulty remains that included under article 2, point 18 of Reg. no. 651/2014/UE 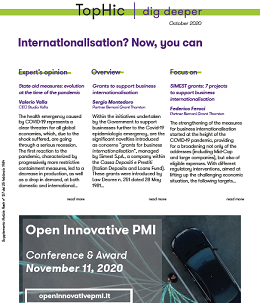