The mandatory automatic exchange in the tax area

To further strengthen means available to Tax Authorities to prevent and discourage aggressive tax planning, Directive (EU) 2018/822 (hereinafter the «Directive»), which includes further adjustments to directive no. 2011/16/EU, introduced the mandatory automatic exchange of information in relation to the so-called “cross-border arrangements”. Specifically, the Directive obliges intermediaries and, in some cases, taxpayers, to inform Tax Authorities on certain schemes, agreements, etc. that could imply the presence of an aggressive tax planning.

The Directive has been implemented in Italy through legislation decree dated 30 July 2020 no. 100 (hereinafter, the «Decree»), which establishes the rules and procedures relevant to the mandatory automatic exchange of information on cross-border arrangements, reportable to the Revenue office, with the competent authorities of EU Member states and of other foreign jurisdictions due to arrangements in force.

The Decree has been recently integrated by the Decree of the Ministry of Economy and Finance dated 17 November 2020, containing the “definition of technical rules and procedures relevant to the mandatory exchange of information on cross-border arrangements, reportable to the Revenue Office” (hereinafter “DM”), thus completing the reference domestic regulatory framework on this matter.

Given the complexity of the regulation, this article provides a brief and introductory description of the key elements characterizing this new fulfilment, the relevant terms and applicable penalties in case of omitted or partial compliance.

The concerned subjects represent one of the most relevant updates of the Directive, which, in fact, extends the mandatory automatic exchange of information to all economic operators being potentially involved in aggressive tax planning structures, while it was previously addressed only to some categories of intermediaries (for example, reference is made to the Common Reporting Standard or CRS).

It must be specified that taxpayers must comply with the obligation at issue only if, substantially, no financial intermediary or advisor being subject to the reporting obligation intervened in the potentially relevant operation.

The Decree specifies that the involvement of one or more foreign jurisdictions occurs when at least one of the following conditions is met:

Therefore, taxpayers must not necessarily be part of a multinational group to imply the application of the reporting obligation; in fact, it is sufficient that such taxpayer is involved in transactions with other tax jurisdictions.

The so-called “hallmarks” that must be integrated in order for the scheme, agreement, or project to be reportable are structured to identify a high number of aggressive tax planning cases.

In fact, these are proper tax evasion or avoidance risk indicators and are designed to identify the following schemes, agreements, or projects:

As it can be understood, the cases considered by the hallmarks are numerous and in fact, the Directive – and, subsequently, the Decree – provides for five hallmarks categories, which are, in turn, divided into further sub-categories, for total fifteen different hallmarks.

Below is an outline of hallmarks:

Hallmarks under categories A, B, C, and E may only be taken into account where they can determine a reduction in taxation (Ministerial Decree, article 6).

Pursuant to article 7 of Ministerial Decree, hallmarks A, B, and C [point 1, letter b), sub 1), letter c), and letter d)] are considered integrated if the tax advantage deriving from the cross-border arrangement is higher than 50% of the sum of the tax advantage and non-tax advantages (so-called “Main Benefit”).

The tax advantage is calculated as the difference between tax payables by adopting the cross-border arrangement and tax that would be payable without such arrangement, while the non-tax advantage is defined as any quantifiable economic (non-tax) advantage.

In fact, besides hallmarks under category D, aimed at identifying the application of potentially opaque structures, only those concerning transfer prices are relevant regardless of the prevailing tax advantage.

With the coming into force of the Council Directive (EU) 2020/876 of 24 June 2020, which modified Directive 2011/16/EU, European countries were authorized to postpone (due to the Covid-19 pandemic) the terms concerning the communication of reportable cross-border arrangements to the Revenue Office to up to six months.

Italy, as most part of Member states (with the significant exclusion of Germany) opted for the postponement of original deadlines, thus implying that first deadlines for the new fulfilments are the following:

These are two one-off communications relevant to the first application period of the regulation.

Starting from 1 January 2021, intermediaries must report information to the Revenue Office within thirty days (generally, these start from the day following that on which the cross-border arrangement is made available for its execution or the day in which its execution starts).

On the contrary, taxpayers report information on cross-border arrangements within thirty days starting from the day following that on which they were informed by the exempt intermediary on the existence of the reporting obligation.

In case of incomplete or incorrect communication, penalty is reduced to one third, i.e. it can be from 1,000 to 10,500 Euro. 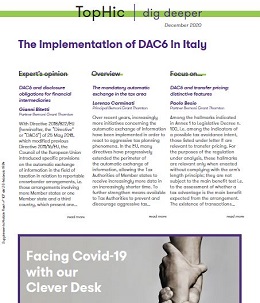