Merger and acquisition activity is escalating, but how do companies ensure deals don’t turn sour? 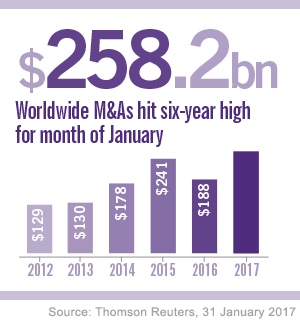 Companies are on a buying spree, making the most of cheap financing to snap up compatible businesses across the world. In January 2017, the value of M&A deals hit a six-year high worldwide. In Europe it set an 11-year record and cross-border deals were estimated to be at their highest level since 2006.

This is a trend that is likely to continue according to Kai Bartels, global leader of mergers and acquisitions at Grant Thornton: “There is a lot of cross-border activity, especially among small and mid-sized companies. There are global incentives, good opportunities to finance deals and money is cheap,” he says.

China was the most prolific at acquiring foreign companies last year paying out more than $170 billion across 7,691 deals, many of which were in Europe.

Germany, with its strong technology, research and development base, drew the most interest. At one stage last year Chinese investors were buying a German company each week, although this pace is expected to ease off (see below).

Confidence is also growing in emerging economies. A Dealtracker report by Grant Thornton shows that India completed nearly 1,500 M&A deals worth US$62.5 billion last year. “There was a tremendous growth in deal activity and a slew of economic and structural reforms in 2016,” Harish HV, a partner at Grant Thornton India, told the Indian press. 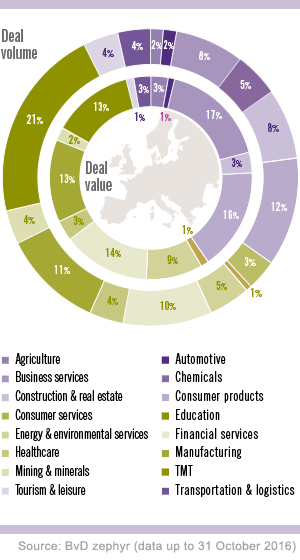 The degree of activity is fuelling speculation of an M&A bubble. Bartels says: “There are good opportunities to finance deals, although we have very high valuations in all sectors. We are close to the leverage we had in 2007/08. Acquirers are willing to pay extraordinary valuations, especially in telecoms and technology, pharmaceuticals and healthcare.”

He explains: “Some strategic players are using this opportunity to buy in to certain niches to strengthen their position for the future. If you have a specific niche then global players are willing to pay for it.”

While the high valuations paid for some acquisitions, sometimes 10 to 15 times EBITDA (earnings before interest, taxes, depreciation and amortisation), can be a boon to the companies being acquired, it puts a lot of pressure on the buyer to make a success of the deal.

Partly because of this, M&A success is elusive, with some commentators citing failure rates of between 70% and 90%. Often though the problems aren't the deals themselves or even the large amounts of money involved. “We don’t see too many pitfalls in regard to valuations. It is culture,” says Bartels. It’s a statement backed up by Fons Trompenaars, a management consultant and author who specialises in intercultural issues. He has claimed that two out of three mergers fail due to not taking care of cultural issues.

“The difficulty is not in the technicality of the deals, which are fairly standard worldwide,” says Bartels. “It is about the cultural aspects and the need for soft skills so you can understand and manage these. You don’t learn this at university. You can only learn it by doing business with representatives from these countries.”

Cultural issues can range from not appreciating different management structures, to shareholder fears that intellectual property is going to be “stolen" or the belief that differences in work ethics are irreconcilable.

Political and religious considerations might then be layered on top of social and cultural issues. “For instance, in Sudan, where we are working on a deal, we can only complete if the acquirer has a guarantee from the Islamic Development Bank backing his own leverage for the transaction,” says Bartels. Likewise, a country like Iran, which is just starting to open up to foreign investment, could present M&A challenges with regard to Sharia (Islamic) law requirements.

How to avoid M&A failure

The key to making a deal successful is to anticipate and manage expectations, a task that requires a thorough understanding of each other's business. 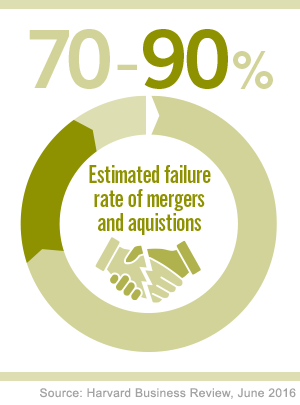 To do this Bartels says: “Buyers should employ advisers from the target country and due diligence research should include visiting the country. This also applies to the sell side – get as much information as you can about any potential acquirer.”

If you do not, failure comes at a high price – not just now, but in the future. This was shown by Toshiba’s recent announcement that it is taking a $6.2 billion write-down on its nuclear plant construction business following its acquisition of Westinghouse Electronic Company, and the latter’s acquisition of construction company CB&I Stone & Webster.

“On the other hand, if you want to sell and your buyers turn out not to be serious then it is likely to have an impact on the valuation when you try to sell to another potential acquirer,” Bartels adds.

A little time and effort spent understanding each other to create a culture of transparency and trust can go a long way when it comes to M&A.

If you’re considering a merger or acquisition and would like advice about how to make a smooth transaction, please contact Sante Maiolica.