Article 16 of the Law Decree n° 147 released in September 2015 (in the following also "The Decree"), introducted the "special tax regime for inbound", becoming applicabile in January 2016. The original law provision was subject to several amendments and clarifications by the Italian tax authorities.

More recently, Law Decree n°34 in force since May 1st, 2019, (also known as "Decree for the Economic Growth") provided for some adjustment of art.16, paragraph 1 aiming to semplify and open the application of the special tax regime to a wider panel of individuals (artist, employees, self-employed,...coming to Italy to start their own business).

The new verison of art.16, as amended by the Decree of the Economic Growth, widened the kinds of income falling under the partial exemption from Italian taxation. The list includes not only that deriving from employment and self-employment, already included in the previous version of the law, but also income assimilated to employment for tax purposes and business income (the latter ruled by paragraph 1-bis of art.16 of the Decree).

Individuals acquiring Italian tax residency in 2019 (as a consequence of moving to italy in the first part of the year), will fall under the previous version of art.16 of the Decree thus they'll have to meet the following requirements:

For individuals acquiring Italian tax residency from 2020 (e.g. as a consequence of moving to Italy in the second part of 2019) the new version of art.16 will be operative. Amended, laxer, requirements will be taken into consideration in order to apply the special tax regime for inbound.

More specifically, individuals will have to meet the following:

Measure of the exemption and duration

Another remarkable change, introducted by the Decree, is the adjustment of the percentage of income subject to tax and relating increasing number of years for which the special regime could apply.

The general rule provides for the exemption of 70% of the income (up to december 31st, 2019, the part exempted will be 50%) for five years  (the first year of tax residency and the following four).

The part of income subject to tax decreases, reaching 10% and the number of years of application increases, up to ten when the individual meets one of the following:

When the individual has three children under the age of 18 or dependant, income will be exempted from taxation in the measure of 70% for the first five years and for the following five the precentage will increase to 90%

According to paragraph 5-ter of art.16, Italian citizens, not registrated with AIRE while living abroad before moving Italy, since January 1st, 2020, will be able to benefit from the partial exemption from taxation, on condition that they qualified as tax resident of a foreign Country, according to the content of the Double tax treaty in place.

Amendmens of the special regime for teachers and researchers

The Decree fot the Economic Growth provided amendments to art.44 of Law Decree n°78/2010 with reference to the number of years the exemption could apply.

The 90% exemption applies for further three years, for a total of eight years, to teachers and researchers with one child under the age of 18 or dependant, even in pre-adoption foster-care or when the individual purchases a property in Italy after the transfer or even during the twelve months previous to the transfer.

The regime can be applied up to eleven or thirteen years when the individual has two or three children under the age of 18 or dependant.

In case of lack of registration to the AIRE during the years preceding to the return to Italy, the regime could apply on condition that individuals qualified as tax resident of a foreign Country, according to the content fo the Double tax treaty in place. 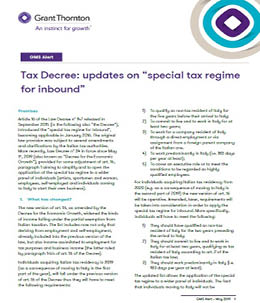