As originally mentioned during the press conference anticipating the provisions introducing the green pass obligation starting from 15/10/2021 and as confirmed in the FAQ of the Minister published on the institutional website, domestic labour is also subject to the provisions of Law Decree no. 127/2021. Therefore, domestic labour employers will be also subject to the obligation to check that their collaborators (carers, domestic helpers, baby sitters, etc.) have a green pass.

This time, the provisions on the green pass do not admit exceptions. As known, domestic labour, due to its peculiarities, was exempted from the compliance with the obligations and the subsequent penalties, which concerned the overall world of work (provisions on safety under Legislative Decree no. 81/2008, penalties on undeclared work, etc.).

This means that the need to safeguard public health has prevailed on the flexibility and favour granted to this particular sector. The decision, however, could not only be aimed to equalize all workers before the law, but also to prevent possible objections due to the breach of equality principles.

The critical issues related to this decision have been well pointed out, considering that a great part of domestic labour employers is represented by non-self-sufficient elderly people, who are not so willing to follow technology innovation. However, they will have to check for the possession of the green pass, presumably by delegating family members or friends.

Therefore, considered the above, with reference to domestic labour, the following can be stated:

Doubts concerning this particular sector are still many and hopefully will be clarified soon.

Just to mention some of these uncertainties: if cohabiting domestic helpers do not have a green pass, do they still have the right to stay in the employer’s house, even if they are not allowed to perform their working activity? How will domestic labour employers act in relation to domestic helpers who do not have a regular employment contract or a residence permit in Italy? In consideration, among other factors, of the personal and affective relationship that often characterizes these working relationships, the fear is that many will ignore controls, which, however, should be performed to safeguard the health of the community. 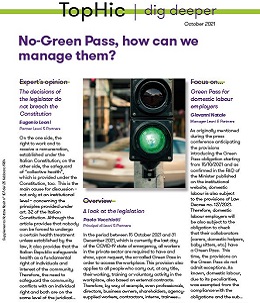