Among the other amendments, the Law introduced a specific provision to well-known article 16 of Legislative Decree n° 147/2015, which introduced the “special tax regime for inbound”, specifically addressed to professional athletes (article 5 of the converting Law). The following paragraphs will analyse the content of the new provision.

The first version of Tax Decree n° 34 already simplified the requirements to qualify for the application of the special tax regime for inbound which now are:

The specific provision for professional athletes

The amendments to article 16 provided by Tax Decree n° 34/2019 widened the pattern of individuals to whom the “special tax regime” may apply. The deletion of the requirement mentioning the high qualification or specialization for inbound allowed also professional athletes to benefit from the partial exemption from taxation.

Article 5 of the converting Law, however, introduced an ad hoc provision adding further paragraphs to article 16 (paragraphs 5-quarter and 5-quinquies) specifically addressed to those athletes falling under the provisions of Law n° 91/1981 (Law on Professional Athletes – in the following LPA).

According to article 2 of the LPA, professional athletes are “athletes, coaches, team managers and physical trainers exercising sporting activity after payment of a compensation, on a continuous basis according to the disciplines ruled by CONI and achieving the qualification from the National Sport Federation, according to the rules provided by the Federations and with the observance of the directives stated by CONI to differentiate the professional from the amateur activity”.

A presumption of employment relationship is reserved to athletes (only for these individuals) while for the other professional figures, the qualification of the relationship should be verified each time, on the basis of the criteria provided by the employment law.

Indeed, sporting activity could be also qualified as a self-employment relationship, where the requirements of the LPA are met (article 3, paragraph 2 of the Law 91/81).

Measure of the application

The new law provision specifies that the portion of income exempted from Italian taxation for professional athletes is reduced to 50% (instead of 70% provided for other individuals) for five years of tax residency in Italy, extendable to further five, where the individual has one dependent child or buys the main abode in Italy.

The application of the special tax regime is a choice for those athletes that are required to pay a solidarity surcharge of 0.5% on the taxable base, already reduced to 50%.

In alignment with what happened for the last solidarity surcharge (at the time the rate was 3%) it can be anticipated that the Italian Football Clubs will consider this charge in the hands of the players, i.e. it will be withheld from the agreed net amount.

Who can benefit from the regime since 2020?

It should be noted, indeed, that the special tax regime for athletes has been in force and applicable since June 30, 2019 but the law specifically requires the individual to become tax resident of Italy. As a consequence, considering the Italian tax rules to qualify an individual as tax resident (article 2, paragraph 2 of the Italian tax law), individuals coming to Italy during the second half of 2019 will presumably acquire the tax residency status since January 1st, 2020.

It is easy to understand that the negotiation with the Italian football club will need to take into consideration the fact that taxes will apply on 100% of the compensation for the period of non-tax residency in Italy (second half of 2019) and only starting from January, the benefit will fully apply.

In order to fully benefit from the application of the special tax regime for inbound, the individual should live in Italy, qualifying as a tax resident, for two consecutive years. To this regard, assessing the residence of family members may be key as an athlete can remain tax resident abroad if his/her family lives there. This is another element to consider while negotiating the agreement with the new football club. Individuals departing from Italy before the above two-year term will be requested to pay taxes further to penalties and interest.

What kind of income could benefit from the partial exemption?

In case of income paid by an Italian football club, it should be noted that not only the “pure” compensation for the matches but also other kinds of income, qualified as “employment income” under the provision of the Italian tax law, paid to the football player could be partially exempted from taxation in the measure of 50%.

A remarkable issue to consider, when it comes to athletes, relates to the payment of sponsorship: it is not so sure and clear whether payments received for sponsorship could benefit from the partial exemption or not. Indeed, depending on the categorization, income from sponsorship could fall under one of the following groups of income:

While income falling under the first and the second category could benefit from the partial exemption, the last one is not considered by article 16 of Legislative Decree n° 147/2015.

What other benefits to football players?

The new legislation offers a really interesting opportunity for athletes and football players willing to play for an Italian club establishing their residency in Italy. This is especially true if one considers the flat tax regime set forth by art. 24-bis of the Italian Tax Code (Special tax regime for High Net-Worth Individual).

According to this regime, taxation of foreign-sourced income can be replaced by a flat tax of 100.000 Euros per year, irrespective of the level of income gained.

It becomes thus crucial to evaluate which of the special tax regimes gives the football player the most valuable benefit, according to the personal situation since the negotiating phase with the Club.

Please read our dedicated articles or call us if you are interested in evaluating your possibilities to seize this big opportunity. 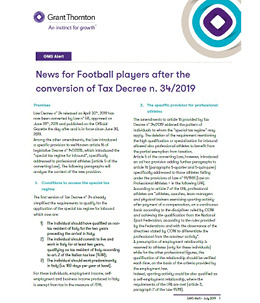