Brexit will cost up to 100 billion Euros

Brexit could be an opportunity, but only if the EU will be able to adopt clear and convenient policies.

On the eve of the general election in the UK, Paolo Besio wrote an article about Brexit, published on 1 June in the quarterly magazine Advisor Private.

Discussing Brexit is the order of the day all over Europe, either if it is seen as a threat or as an opportunity. One of the main discussed issues is the cost of Brexit. While initial estimates were near to 60 billion euro, it now seems that the UK will have to pay 100 billion euros to follow up the outcome of the referendum held last June.

As concerns tax, it must be pointed out that the introduction by the UK of preferential tax regimes or State aid – which would constitute unfair competition to the European Union – could prevent the reaching of an agreement. However, what is pushing large banking groups to offshore to other European capitals is uncertainty. A recent document of the European Union shows how tax uncertainty can seriously damage business and that governments must implement clear and certain tax policies in the shortest time possible.

As concerns the Italian situation, according to Standard & Poor’s index (Brexit sensitivity index), Italian businesses are not particularly exposed to UK ones. However, certainty in tax policies is crucial to attract foreign investment. Last national and international legislative initiatives, as Cooperative Compliance, advance agreements and Patent Box, can be a good starting point to increase Italy attractiveness. In fact, Brexit can represent an opportunity, but only if governments be able to implement clear and convenient tax and legal policies. 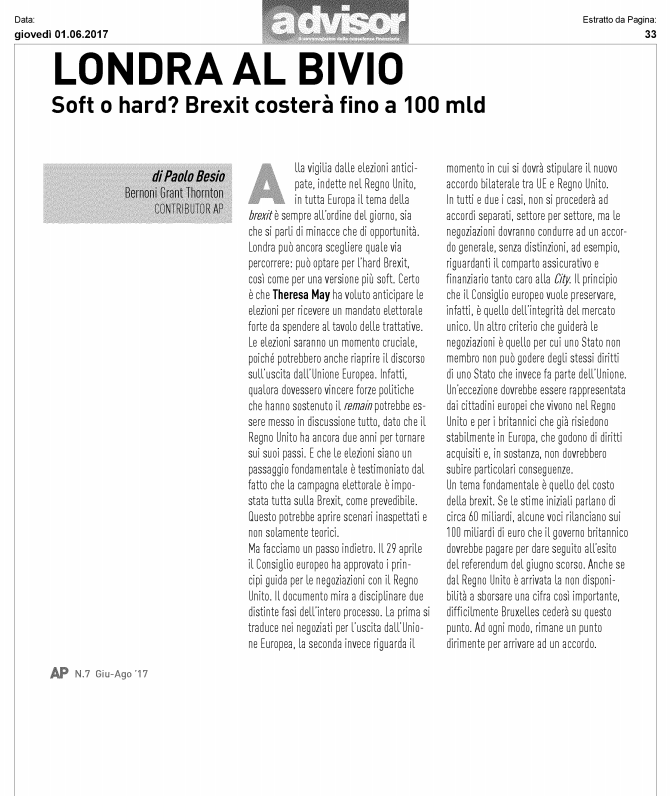