A guide to navigating the M&A process

Cross-border merger and acquisition opportunities are increasing, as healthy company financials in many economies drive an appetite for deals. Grant Thornton’s International Business Report (IBR) shows that  companies within Africa and the Middle East have the most appetite for transactions over the next three years, followed by North America and the EU.

However, while cross-border transactions can generate new market opportunities, they often bring heightened risk and a range of challenges. Deals can be hindered by many hurdles anywhere in the process.

To successfully navigate your transaction landscape, it’s important to understand and prevent potential risks. You also need to know how to smooth the integration process after completion of the deal.We asked over 2,000 decision makers of mid-sized businesses to share the most significant risks encountered before and after a transaction. Mapping these challenges across the deal lifecycle, we added best practice guidance to mitigate these hazards. Our aim is to provide a guide that will enhance the success of your cross-border transaction, across any industry or region.

"Cross border M&A operations have always been a viability indicator of national economies. Economies that carry out cross border transactions and induce their companies to acquire international entities are considered healthy economies able to improve their role in the international context.

Italy, on the contrary, is seen more as a prey rather than as a predator, which is demonstrated, for example, from the fact that many Italian prestigious entities are owned by foreign holders. This is also due to the fragmentation of the Italian economy in small and medium enterprises and to the lack of national giants.

In fact, Italians have introduced the concept of “multinazionali tascabili” (pocket multinationals) to describe Italian middle companies that are leaders in their respective industries and that are able to develop internationally also through M&A operations in other markets.

As all transactions, every single M&A operation has specific characteristics that must be duly managed in order to prevent them from becoming hindrances to the success of the operation itself.

Typically, the most critical elements consist in contractual aspects, legislative restrictions, valorisation of the company involved in the operation, seller’s liability, support to strategic customers and/or suppliers, loss of key people. Then, when the transaction is concluded, the so-called post deal integration can determine the success - or the failure - of the operation.

Integrating the acquired company efficiently and effectively and obtaining management saving and scale economies, thus reaching a better market coverage, makes the operation successful. Otherwise, the operation would remain just a formal agreement or, worse, be a failure and lead to the failure of the involved entities.

In a cross border transaction, critical elements increase significantly, both in number and in importance. Therefore, the pre-acquisition due diligence activity is crucial. Besides the traditional (financial, business, tax and legal) due diligence activities it is also important, especially today, to invest time and resources in an IT due diligence.

Besides analysing information systems (i.e. analysis of their suitability), it is also necessary to investigate cybersecurity, which is such a popular issue today but, often, the relevant principles are not very much considered.

Integrating a company without analysing its cybersecurity level, especially in industries where know how and creativity play an important role, means jeopardizing the value of the acquired company.

It is demonstrated that cyber espionage can cause serious damages and that cyber-attacks increase when the management is focussed on other things, which means that a company can most likely come under attack during the post integration phase.

Investing resources to know the state of the art and filling the gaps has certainly a cost: but this cost is insignificant compared to the damages caused by the lack of cybersecurity that protects the company against internal and external threats.

Besides legal risks relevant to exportations in other countries subject to different rules (and political-economical risks), when the investment is carried out in countries under geopolitical critical situations, there is a more serious risk to be considered, i.e. the economic culture of each country.

If different cultures are not duly understood and managed, the operation and the integration of the involved companies could be hardly performed. It is therefore necessary to plan a cross border operation carefully, focussing on the mitigation of risks, investing the right resources in the pre- and post-deal phases and rely on consultants having a vast presence in the countries involved, in order to ensure a consistent management of the transaction." 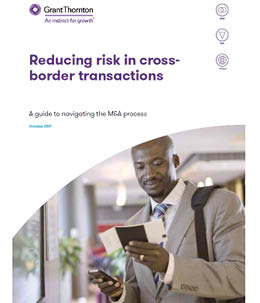