The increasing importance of tax governance

Some of the tax crimes listed in Decree no. 124 fall within the scope of crimes under Legislative Decree no. 231/2001 - “Regulation of the administration liability of legal persons, companies and associations without a legal personality”.

As a consequence, besides the direct criminal liability of the person who commits the crime, the Decree provides an administration liability of the legal person obtaining an interest or advantage from such crime.

The impact of these new law regulations will be considerable – not only for Italian legal persons, but also for foreign entities carrying out business in Italy – considering that, from now on, they will need to implement an organizational structure which identifies and analyses all tax risks related to their activities, in order to ensure a proper management system.

The above is meant regardless of the fact that the foreign company has a permanent establishment in Italy or not.

Therefore, we warmly suggest companies to update their compliance system, implementing a 231 organizational model or – if already implemented – updating it basing on the above new provisions.

Our firm has a team of tax advisors and lawyers specifically dedicated to these services. Contact us for any information and clarifications needed on this issue.

The number and type of crimes falling within the scope of 231/01 regulation is increasing. Tax crimes, including, among others, the issue of invoices or other documents for non-existing operations, have recently been included among those crimes generating administrative liability. This implies, more than ever before, the need to update the 231 Model to cover tax crimes, but also to implement a proper business system for the management and control of tax risks, in order to efficiently prevent the risk of committing tax crimes.

This requires the assistance by a team of professionals with multidisciplinary skills, including legal (civil law and criminal law), tax, administrative, organizational and IT skills.

News on Legislative Decree 231/01 – the introduction of tax crimes

Among the most significant news introduced by Legislative Decree n. 124/2019 (so-called Tax Decree), converted with amendments into Law n. 157/2019, is the introduction of the main tax crimes in the list of “predicate offences” leading to company liability.

Speaking about the legislative framework, it is worth recalling also EU Directive 2017/1371 concerning the fight against fraud to the Union’s financial interests by means of criminal law (so-called PIF Directive), approved on 5 July 2017.

Among other innovations, it will soon include serious VAT frauds among predicate offences leading to legal entities liability, where the serious nature of a criminal offence is defined by the PIF Directive itself basing on: (i) the cross-border nature of the criminal offence (“connected with the territory of two or more Member States”) and (ii) the high amount of the damage (“a total damage of at least Euro 10 million”).

Having to include criminal tax crimes among the predicate offences, in order to enact the PIF Directive, Italy issued a European Delegation Law (Law n. 117 dated 4 October 2019) entrusting the Government with the transposition of the abovementioned EU Directive 2017/1371.

Specifically, the Government was entrusted with the task of “integrating the provisions of Legislative Decree 2001 n. 231, regulating the administrative liability of legal persons, companies and associations, including those not having legal personality, expressly providing for the administrative liability for criminal offences of legal persons, also for crimes against the Union’s financial interests not yet included among the provisions of the abovementioned decree”.

In addition to administrative sanctions, the Government was called upon to implement also disqualifying penalties provided for under art. 9 of the PIF Directive, which include the exclusion from entitlement to public benefits or aid, the temporary or permanent disqualification from the practice of commercial activities, the placing under judicial supervision, the temporary closure of establishments which have been used for committing the criminal offence.

The introduction of tax crimes - or, more specifically, the failure to include them - among predicate offences covered by Legislative Decree 231/2001 in the past, was doubtlessly one of the most controversial and discussed issues concerning the administrative liability of legal entities. On this topic, two opposite currents of thought emerged:

The extension of the administrative liability of legal entities for those tax offences better specified below ended the dispute above.

The explanatory memorandum to art.39 of Law Decree 124/2019, converted with amendments into Law n.157/2019 actually explains that: “with the introduction of the administrative liability of legal entities for significant tax offences committed in the interest or for the benefit of the latter, a legal void has been filled relating to the protection of the interests of the Revenue Office which can no longer be justified both in the light of the recent EU regulations and due to the distortions and uncertainties that this regulatory gap contributed to generate”.

In particular, art.39, para.2 of the Tax Decree, converted with amendments into Law n.157/2019, introduces art.25-quinquiesdecies into Legislative Decree 231/2001, thus broadening the list of predicate offences for the administrative liability of legal entities. The original version of the Tax Decree provided for the introduction into Legislative Decree 231/2001 only of the offence of fraudulent declaration through the use of invoices or other receipts for nonexistent operations, but this list was further integrated during the examination by the Chamber of Deputies - and finally confirmed by the conversion Law - by providing the following administrative sanctions for legal entities:

Penalties increased by one third are provided in case the entity has gained a relevant profit following the tax crime.

Occurring the conditions under art. 13 of Legislative Decree no. 231/2001,i.e.: (i) if the entity obtained a relevant profit from the crime and the crime was committed by persons with management roles or by persons subject to other persons’ management if, in this case, the crime was determined or favoured by serious organisational lacks, or (ii) in case of reiterated crimes –, the following additional interdictory sanctions apply:

As regards the effective period of the new regulation, art. 39, para. 3 of the Tax Decree, turned with amendments into Law no. 157/2019, identifies a different effective period compared to that indicated in the Law Decree under art. 60, basing on which the decree came into force the day after the publication in the official gazette: the provisions, in fact, apply only starting from the publication in the official gazette of the Law Decree conversion law on 24.12.2019.

Lastly, it must be highlighted that the above-described regulatory evolution requires companies, now more than ever, to analyse all their tax risks related to their activities, and implement organisation and control models aimed at preventing tax crimes. In practice, companies must prove to have rules and procedures to manage tax returns and tax payments, procedures for the preparation and constant review of budgets, reporting procedures, control of irregularity indicators. 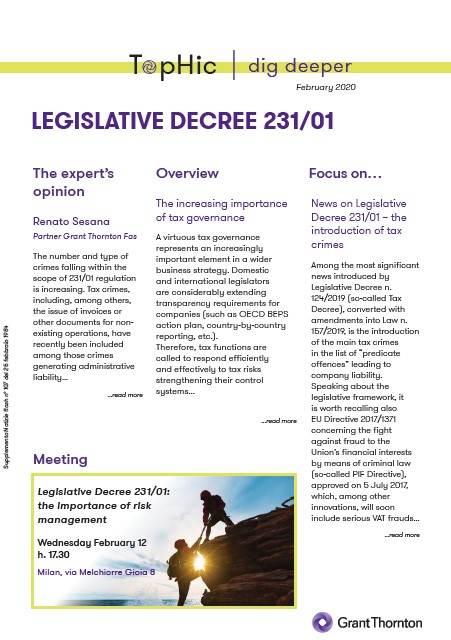